"It's pretty bumpy. If you're not paying attention, you might mess up your car," said Mildred Henderson, an employee at the Days Inn and Suites in Coralville. 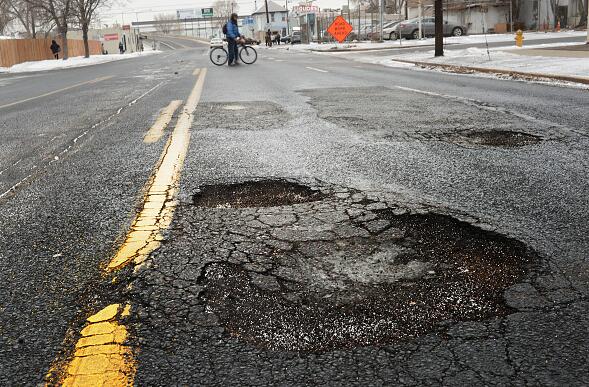 Henderson said the growing number of potholes on 1st Avenue is getting old, but maintenance crews in Iowa City and Coralville are trying to patch the problem.

"Some of these are a band-aid right now but obviously they work for a period of time and that's what we're looking for," said Troy Palmer, a maintenance worker with the Iowa City streets department.

That's not the only problem. A major road construction project will reduce some of 1st Avenue to two lanes from March through November.

"People that are headed out of town after work, they know there's been construction so they try to avoid the road so that takes away the opportunity of some customers driving by that might be hungry to stop by the establishment and eat," said Abraham Tijerina, the owner of Casa Azul.

Tijerina said business is typically slow now and the timing of the road construction doesn't help.

"It's just something we'll have to deal with and hopefully they get it done as fast as possible," said Tijerina.

The city of Coralville said the upgrade, which will start in mid-March, is long overdue.

"There's a lot of potholes there and the surface is just terrible this spring. We're doing our best to keep it passable but it's a tough job," said Dan Holderness, a city engineer for the city of Coralville.

It's something businesses are looking forward to being done.

"It's going to make the road better eventually but in the meantime, you do feel it a little bit," said Tijerina.

The city of Coralville said another road construction project will start next week on Coral Ridge Avenue between Oakdale Boulevard and W. Forevergreen Road.