RUSH: I have made reference to the amount of lying that has taken place in the media in this country over the last -- I guess we have to say four years. We're into the fourth year of the Trump presidency now. He was elected in 2016, inaugurated 2017, it's the fourth year, I sometimes go back and forth on three and four. But it may even be longer than that if you count 2016 as a campaign year. The amount of lying that has been engaged in by the Democrat Party and the American media, the Democrats in the media, is now incalculable. It's safe to say that everything they say is a lie.

The lying about Donald Trump is now out of control. It's everything. Practically everything being said -- I want you to think how hard this is too. Here we have in Donald Trump the most visible, the most accessible, the most constantly in front of cameras and the media president of the United States, and yet the reporting about him is 99, almost 100% lies. Think about how difficult that is.

If you can succeed in lying to the American people, if your lies can prevail about the most public man - I mean, it would be easy to lie about a president who doesn't appear before the media much, it would be much easier to lie about a George W. Bush, which they did, by the way, or his father, George H. W. Bush. Clinton was in front of the cameras a lot 'cause he loved it, but Obama was -- I went back to the archives. Remember the Limbaugh Theorem? I'm sure you remember the term, the Limbaugh Theorem. You've probably forgotten what it was.

I developed the Limbaugh Theorem to explain how it is that Obama seemed to never end up being be being attached to his own policies, to his own agenda. Obama was actually running against the things he that he was proposing. It was the most amazing thing. And he was given this cover by, of course, the Drive-By Media, but he was never held accountable for anything because he never left the campaign.

Obama's whole strategy was to be constantly campaigning against these invisible yet powerful forces that were attempting to deny him and his supporters and his voters the successful implementation of his agenda while he was implementing that agenda, such as Obamacare. So evolved the Limbaugh Theorem.

So here's Obama, who they didn't dare lie about because they didn't want to disappoint him. But they are lying about Donald Trump. I mean, the most recent example is this walk that he took from the White House across Lafayette Park to St. John's church. Everything about that is a lie, everything, and yet it was on television. Everybody saw it.

Now, stop and think about this. If you were gonna do this, how difficult this would be as a project to lie all the time about the most public man in the world who says more in public and does more in public than probably the past three presidents combined. Imagine the power you have if you can take somebody as public as Donald Trump and for the rest of the country lie repeatedly about what he is doing, saying and not saying.

There is, in fact, a timely article about this, and it's the New York Post, it's by Eddie Scarry, or Scarry, I don't know how you pronounce it, S-c-a-r-r-y. And the headline is: "The Lying About Donald Trump is Now Completely Out of Control -- Anti-Trump liberals (i.e., Democrats and the media) just have to find something -- anything -- wrong with the president, even if it means making it up. The perpetually not-President Hillary Clinton on Monday shared a side-by-side photo of the White House, one lit up in a rainbow spectrum from 2015, when Barack Obama was in office, and the other appearing almost in pitch black with no lighting. 'Elections matter,' tweeted Clinton."

"Former Obama adviser David Axelrod shared the same image of the darkened White House, calling it 'perfect symbolism,' because, 'if ever the country needed the occupant of the White House to shed light, and not heat, now is the time. Sadly, the lights are out.'" 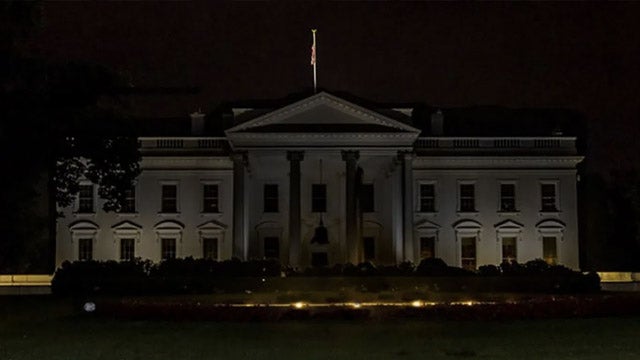 It turns out that the photo was not of the White House at any time Trump has lived in it. The photo that was used as a metaphor for Trump's cowardice was actually a photo from the Obama years, a photo of the Obama White House.

"So pervasive was that meme on social media that the Associated Press was moved to fact-check and let liberals know that, sorry, the slam dunk on Trump was actually an embarrassing rebound." That's a photo from the Obama White House. "People even started saying Trump was 'hiding in his bunker' and the lights went out -- until a CNN reporter pointed out the main lights always go out at 11 p.m.

Except the problem always was that the children-in-the-cages photos were from 2014, when who was president? Who? Oh, that's right! Barack Hussein O. We were separating children from their parents in 2014 because it was the law. So they went and got pictures from 2014 and tried to pass them off as pictures of the Trump administration. The Charlottesville lie is no different than the "hands up, don't shoot" lie.

He added that the Floyd incident filled Americans all over the country with horror, anger, and grief. "But we can't report that because Trump doesn't have empathy, you see. We're not allowed. Trump is not human. We cannot do anything that will humanize Trump. We cannot report that Trump has anything approaching empathy." So they lie about it.

It's just everything they report about Donald Trump is a lie, and it's kind of amazing they get away with it given that he is the most public -- the most constantly on camera and behind microphones -- president we've ever had. Last week, two days after the death of George Floyd, Trump ordered the FBI and the Justice Department to conduct an expedited investigation into the matter. The press ignores that.

That's essentially the sum total of the purpose here of all of these lies, is to try to convey the impression that Trump's hatred, Trump's persona, the fact that Trump won has created this legitimate hate; that the anger and the looting, the rioting, the hatred, it's all legitimate because Trump is so hated and reviled. And so, folks, never forget what this is about and has always been about.

It's about separating you Trump supporters from Trump. It's about driving a wedge between the base and Trump. That's what this is. They want you to conclude that maybe electing Trump was a mistake; that electing Trump, maybe it is responsible for all this. "Maybe Trump is so incompetent -- maybe is such a boob, maybe so mean, maybe so whatever he is -- maybe this stuff isn't gonna stop until we get rid of Trump.

"And it's legitimate, because Trump is such a bad guy, 'cause Trump is so unqualified, 'cause Trump's so mean, Trump's so whatever he is, that all of this -- from the virus to the lockdown of 40 million people losing their jobs and livelihoods to the country's economy crashing to now the wanton destruction of American city -- is all totally understandable. It's all legit.

"I mean, it all makes perfect sense the country hates Donald Trump. A vast majority of Americans realize what a mistake it was. A vast majority have known for a long time. But, you Trump voters, you gotta get with it now. You gotta get up to speed. You gotta understand that you guys are responsible for this and you have to renounce him." 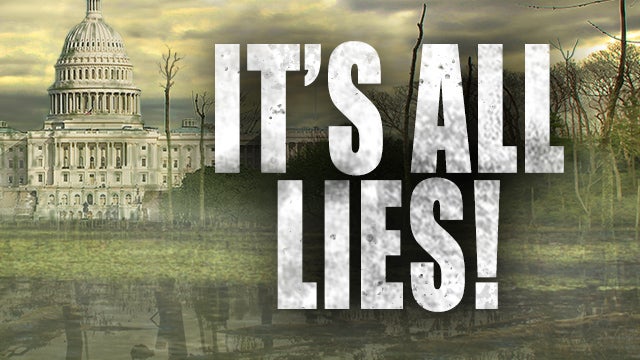 That's the objective, and they're not gonna stop -- and I'm gonna just tell you this: If we lose in November, everything we knew and believed in our entire lives is gonna be in flames, not just Manhattan and not just Minnesota, not just Los Angeles. They are telegraphing for us what this country is gonna be if they win. Look at what is happening in America where Democrats are in power.

The messes are not getting cleaned up, are they? The violence is not being quelled, is it? It's not being stopped. The economy is not rebounding. It's continually shut down. They are telling you what your country's gonna be if they win. They're showing you as well as telling you. Audio sound bite number 14.

To show you the evidence, more evidence of how everything about Trump in the media is a lie. Mark Esper, secretary of defense, this morning at the Pentagon spoke about the protests around the country, and he blows up all the fake news that you've heard over the past two days.

ESPER: The option to use active-duty forces in a law enforcement role should only be used as a matter of last resort, and only in the most urgent and dire of situations. We are not in one of those situations now. I do not support invoking the Insurrection Act.

RUSH: Okay, but we've been told that Trump wants to do it. He's gonna send the military out there if he has to, and they've all been talking, "Trump's a dictator! He's gonna turn into a banana republic guy," and he's secretary of defense is saying, "No, no, no, no. It's not being considered. We're not gonna do it." All morning they have saying the secretary of defense was unaware that he was gonna be walking to the church when Trump gragged him and said, "Hey, let's go take a walk."

They said the secretary of defense had no idea where he was going. 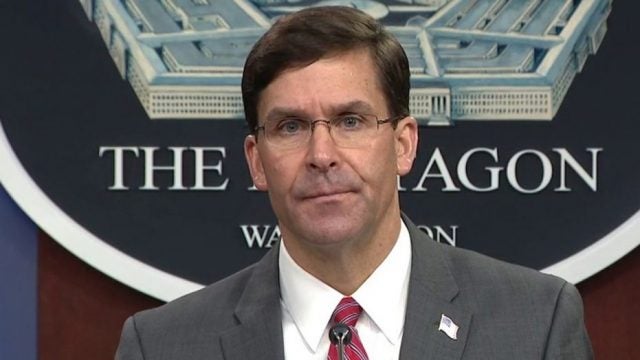 ESPER: I want to state very clearly for all to hear my account of what happened that Monday afternoon. I did know that following the president's remarks on Monday evening that many of us were going to join Trump and review the damage in Lafayette Park and at St. John's Episcopal Church.

This is the media reporting, "He had no idea where he was going! Trump fooled to him. Trump lied to him. Trump commandeered him for credibility." He said, "No, we all knew where we were headed. We all agreed with it. We all wanted to go -- and, by the way, there was no tear gas." You know, this has been an official statement out of the Park Police for two days, and the media is still reporting the lie that tear gas was used on peaceful protesters.

ESPER: I also want to address a few other matters that have been raised about that evening. National Guard forces did not fire rubber bullets or tear gas into the crowd as reported.

RUSH: "id not fire rubber bullets or tear gas into the crowd...." He's only about the millionth federal official to point it out in two days, and still the lying on news networks about it continues.