Remember all that? We had to destroy the economy! We had to put 40 million people out of work. Remember all that? All so millions of people would not die. Well, the main fearmonger -- the man responsible for the model that world leaders cited as their excuse to shut down their countries, including in this country -- is this Neil Ferguson guy from the U.K. Remember, he's the guy that first published the model that said 2.2 million people will die -- 500,000 if we engage in social distancing. But the first figure was 2.2 million if we didn't do anything. His model has yet to be right, but everybody relied on it. Well, now this same guy says that the lockdowns ended up doing nothing, and that Sweden shows that every country would have had the same outcome whether they had locked down or not.

RUSH: So this epidemiologist, Neil Ferguson, says essentially that these lockdowns didn't do anything. (paraphrased) "Sweden shows that every country would have had the same outcome without the lockdowns and social distancing." He was asked why 4,000 people had died in Sweden instead of the 90,000 he had predicted. Oh, yeah. Oh, yeah.

This guy, Neil Ferguson's predictions at the outset said 90,000 people in Sweden would die because they weren't gonna lock down, and 4,000 people died. They asked him, "What happened?" He said, "Well, I think it's an interesting question." (snort) By the way, Sweden's GDP, gross domestic product, has gone up during the crisis. He said, "It's interesting that adopting a policy which is short of a full lockdown...

"I mean, they've closed secondary schools, universities. There's a significant amount of social distancing, but it's not a full lockdown, and they've got quite a long way to the same effect." He was speaking before a House of Lords' Science and Technology Committee. The guy who said, "A half a million Britons could die," said, "Well, it's an interesting question." 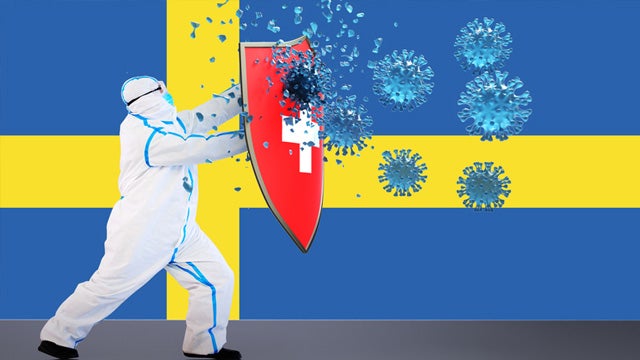 As well as fewer deaths, "Sweden's GDP actually grew in the first quarter of 2020, suggesting that it might avoid the worst of the economic fallout from the crisis." They didn't lock down. They didn't shut down. They didn't close. They left it voluntary, essentially. They trusted people -- and there were lies about that, by the way, throughout the period. "In Sweden, massive numbers of people are dying. Sweden's experiment is failing!" All this stuff was out there; we were being bombarded with it.

He's never right about anything. It's a classic in how all of these elites and all these establishment types are propped up by each other, even though they are incompetent, demonstrably wrong, left and right. Well, the reason is because the guy's predictions serve a purpose. They help governments keep people in line. They help governments herd people into action that they otherwise wouldn't take by scaring the heck out of 'em.