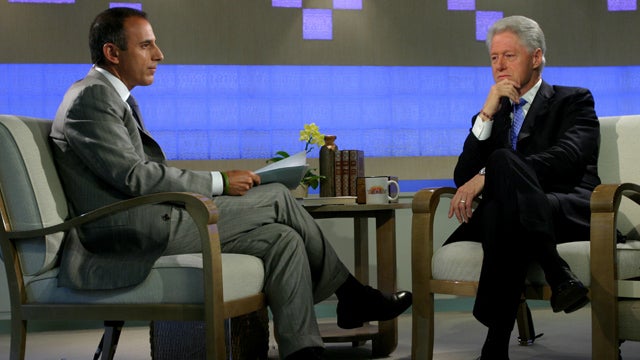 I mean, if RAPE is a screaming, all-caps, blaring-red headline, let's all remember Bill Clinton, who was credibly accused of it. I'm just tossing it out there.

RUSH: A Drudge headline: "Matt Lauer Accused of Rape." It's the latest Ronan Farrow book. You know, that Ronan Farrow kid, he's Mia Farrow's son, and he's a pretty smart kid. NBC fired him rather than run his story. Well, they spiked his story on Weinstein and some of these other people, and that's what caused him to go to New Yorker to reveal it. But it's rumored that Ronan Farrow's dad is Frank Sinatra.

Frank Sinatra was married to Mia Farrow for a while -- like, even before she hit puberty. He had a good comeback when he was asked, "Is Frank Sinatra really your father?" He said, "We're all Frank Sinatra's sons." It was a great line for a young kid to come up with. Remember he got the Cronkite award? (laughing) This is so funny. Poor kid. They put him on MSNBC as the next great whatever. He had never been on TV before. He had never been a journalist on TV.

They put him with a show on MSNBC. After three shows, he wins the Cronkite award for journalism excellence in something or other! (laughing) He had to be profoundly embarrassed. They're giving him an award after three nights. But this is what they do to establish credibility for their flock. Anyway, the alternative headline should be: "Matt Lauer Accused of Doing What Bill Clinton Did." Can you imagine if Drudge ran that headline? Can you imagine the hell that would break out?

Now, the next story, "Savannah Guthrie Says NBC Is ‘Disturbed to Our Core’ Over Matt Lauer Rape Allegations," and so is Hoda Kotb. For those of you in Rio Linda, it's Hoda Kotb. But it's pronounced Kotb, and they have spoken out now. Savannah Guthrie and Yoda -- Hoda -- Kotb spoke out on the Lauer allegations. Now, I realize it's gonna be hard for NBC to stand up for certain abused women. I mean (sigh), they're in a tight spot here.

I mean, they hired Chelsea Clinton. They paid her a small fortune to do next to nothing. They hired Ronan Farrow, gave him a journalism award after three nights. They probably were thinking that Hillary would follow Obama as president. You want to talk about delusional? Hillary Clinton, "Yeah, I can beat him again." What, does she think that she's the legitimate winner? They do! They really think it. They've bought their own delusion.

Anyway, "Savannah Guthrie said NBC staffers are 'disturbed to our core' over allegations that Matt Lauer raped a female colleague. Guthrie and co-anchor Hoda Kotb took a moment on Wednesday’s broadcast to solemnly address Lauer’s alleged behavior that led to his ouster in 2017.'I feel like we owe it to our viewers to pause for a moment,' Guthrie said..." Why do you "owe it to ... viewers to pause for a moment"? So they can take a moment to visualize Matt Lauer doing this?

What's the point of pausing for a moment? "This is shocking and appalling," said Savannah Guthrie. "I know it wasn't easy for our colleague, Brooke, to come forward then, and it's not easy now. And we support her and any women who come forward with claims. It's just very painful for all of us at NBC and who are at the Today show." 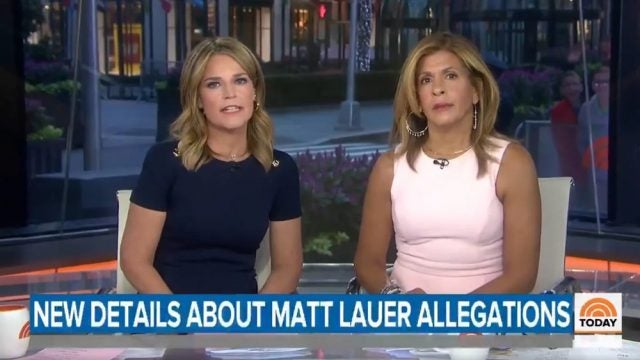 Now, you know, folks, this whole sordid tale provides an eye-opening gaze into so-called modern feminism. What has modern feminism taught women or attempted to teach women? And I'm tracing modern feminism back to 1969, 1970. I was 18 years old in 1969, and that's where I was first confronted by it. I was doing radio from my little hometown station. We had a remote Saturday morning broadcast at Sears. It was a money making thing for the owner. We had this little portable thing that played records and people would come by to watch.

And they said, “You know what? Let's kill a community requirement. Why don’t you interview some people.” I said, “Okay.” So I asked a classmate at Central High School, a woman, to come by. I don't even remember what the subject was, but this woman went on a feminist rant. It was the first I'd ever heard of any of this.

But I was smart even back then. My red flags went up and I said, there's something going on here that I haven't heard about that these women are looking at and reading. Lo and behold, I was exactly right on the money. (interruption) No. I don't remember her name, and even if I did, I wouldn't mention it. It's not the point.

She was 18, 17 years old at the time, and I'm just telling you, this is when I first became aware of it. And then from that, I'm 18, I get to Pittsburgh when I'm 20, and for the next 10 years, this modern-day feminism just totally screwed up what had become the traditional, normal male/female relationship dance, so to speak. And it took a lot of learning. I mean, you open the door for a woman and you get yelled at. “I can do it myself! Thank you.”

“Don't tell me that. What about my brain?” You know, that kind of stuff. It was real. You know, you compliment a woman on her appearance, it was an insult. You were objectifying her. You’re 21. You don't know anything about – you’re just trying to get along and you find out that you're some reprobate enemy just because of your gender.

Anyway, what modern-day feminism did was tell women they were so free to do whatever they wanted to do. You can have it all. And that caused a bunch of women to think having it all was to copy the lifestyle of men. Become CEOs of corporations, become members of private clubs, all this stuff. Rather than pursuing actual interests, it became a copycat, and it became a movement where success was defined by how many male institutions you infiltrated and took down.

And part and parcel of this was that women could do whatever without any more judgment. There wasn't gonna be any stigma to any lifestyle choice you made. You could get pregnant without getting married. In fact, it pushed the idea that a relationship should not be a factor in your life's happiness or satisfaction.

So a lot of young women bought into it hook, line, and sinker, thought it was the greatest thing, and they went out and they engaged in all this newfound claimed freedom with no consequences. And then biology takes over. They go out and they get pregnant while they're working, have to make a decision.

So they get maternity leave or, you know, Romper Room at the office. And then they decide, some of them, they don't want to go back to work and the other feminists get mad at that. You're betraying the sisters! You shouldn't stay home with the baby. Get a nanny, a babysitter, make your husband do it, you go back to work. Massive confusion sets in. Anger, resentment.

Women were told to go party like the guys. It's cool to go to a guy's hotel. You've got the power, girlfriend, you run the things now, go do what you want to do. And then after the guy misunderstands all this newfound freedom that you are exhibiting, you feel violated, after having sex with the guy. I'm telling you, it does more to screw things up than anybody will ever admit. I mean, you could claim that your career would be hurt if you don't have sex with Weinstein. Gotta do it. It's what you gotta do to get the job. I'll deal with the consequences later.

Well, later was when Ronan Farrow's first book came out about Weinstein and the jig was up. But there were so many contrary, conflicting messages. Be strong, be free. Then on the other hand, be weak, be helpless, be a victim. And feminism today is really fostering victimology. Feminism today failed in its original charge to make women the same as men because they're not the same.

And since feminists are still mad that men run the world, women have what? They have descended now to exactly what they were prior to 1969 or '70. They're now victims. I'm talking about young women. Weak, helpless, despite having been told all this power. But sex without consequences was the biggest lie that liberal activists pushed on young people, men and women. "Be free, be yourself, do what you want to do. We've got remedies. There aren't any consequences.”